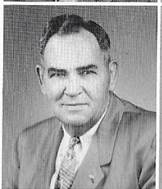 We, as high school students, were so often totally wrapped up in ourselves. We were engrossed in having fun, trying to pass tests, and obsessing on how “mean and strict” some of our teachers were. The following is a story that was shared with me about Mr. Wise, our study hall monitor:

“One day Mr. Wise noticed a student who was not eating during lunchtime. It dawned on Mr. Wise that the student probably did not have the money for a tray of food. So, Mr. Wise spoke to someone behind the serving line to have a tray prepared. Mr. Wise told the student that for the rest of the year to get into this particular line and a tray of food would be provided–no money would ever be an issue. The student was too proud and never accepted the offer– but the opportunity was there.

Also, on the day of graduation, Mr. Wise told the same student that attendance to college was possible—tuition and fees would be taken care of by Mr. Wise. This was money that Mr. Wise had been setting back for his daughter to attend college. The only strings attached to this arrangement: when this particular student graduated from college and got a good job- the favor would be returned to Mr. Wise’s daughter. Pride again got in the way of the student and the offer was not accepted. The student never said any words of gratitude to Mr. Wise for his generous offer and felt Mr. Wise probably went to his grave thinking the student was ungrateful.”

The person who told this story to me did not intend this to be a commentary about a nameless, directionless teenager who had no advice, but rather about Mr. Herb Wise…the big guy on the podium in the front of Study Hall….the one who we all took for granted but the one who was silently an angel with a heart bigger than he was.

As you will remember, on September 10th Pat & Patty Payne remained in Naples to ride out Hurricane Irma which made a direct hit on Naples, FL. Pat was the only Board member to be in Naples during the event. After the wrath of Irma and because of all the damage that the storm caused, Pat rode his bicycle around checking on everything and everyone in his area. He kept all of those in the Wyndemere community and those who had evacuated abreast of the situation. No one can possibly imagine the work that he and others did in order to get everything back in shape. It seems as though Pat became known to everyone as “Man on the Ground” because of the many reports he sent to northern Wyndemere members. Pat was presented with this memento to signify his participation in the aftermath of the storm.
This is an excerpt from Pat’s letter to the staff members who stayed with him:
This memento with the accompanying appreciation message presented at the Town Hall was really beyond special. First, the artwork is so very perfect with the depiction of Irma captured in glass. Talk about classy! But the words of appreciation will live with me longer than any physical symbol. Beyond all of that, may I say the most special part of all of yesterday was to stand along with you in front of the Town Hall meeting. As some of you know I spent two years in Vietnam fighting what we now realize was an ill-advised war. However unwise that conflict was, the men and women there represented the best of America and I have always been very proud to have stood with them. Well, today I was equally proud to have stood with you during Irma and the aftermath because you are indeed the best of America as well. I believe even better days are ahead for our terrific club and I look forward to sharing them with each of you.
Thank you so much!
Pat Payne
“Man on the Ground”
In the midst of the storm’s recovery, Pat had a birthday. On September 21, while everyone was still hard at work getting things back to normal, the staff of Pat’s great community gave him a surprise 75th birthday party. Pat’s three children had planned to fly to Naples to surprise him but the aftermath of the hurricane made that impractical. Below is a picture of Pat enjoying his big day with the club staff. Pat does not look– nor act– like a 75 year old!!! 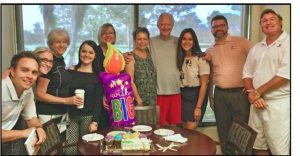 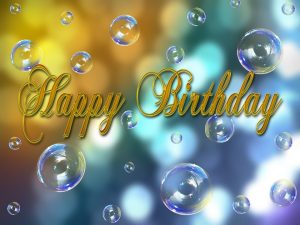 News from our Graduates

David Pettus
“Aloha
Sorry we haven’t been making it to reunions; but our welcome mat is out for classmates coming to Hawaii… The news here is that we are busy with our fall harvest of macadamia nuts. A few of our classmates are on our mailing list, but not all, so here is the message we are sending out to see who would like some!
Our 2017 macadamia nuts are ready! This year’s harvest is early, in plenty of time for the holidays. Better order early, though, because last year we ran out!
As always, our nuts are grown naturally in our orchard, right across the street from Hawaii’s very first macadamia trees. They are lightly roasted and lightly salted in small batches by local macnut wizard Bob Yurth.
Just tell us how many pounds you’d like and the address(es) you want them sent to. We’ll email you a PayPal invoice for $24 per pound (including Priority Mail shipping) that you can pay easily whether or not you have a PayPal account, and your nuts will be on their way. Or you can send a check if you’d rather. Nice and easy!
It’s always a pleasure to be part of your enjoyment. Let us hear from you today, to make sure you get all you want!
In Gratefulness,
Dave and Sherry”
Note: David’s contact information can be found in the Class Directory 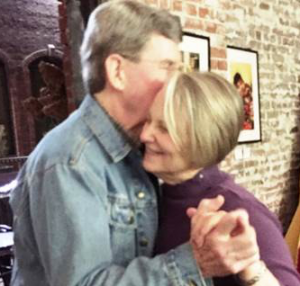 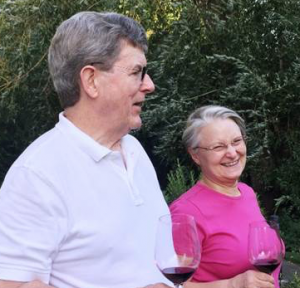 Jerry Causey – “I was cleaning up my hard drive and ran across a couple of newish photos (2016) that might be of interest to the Class of ’60.

Our town, since July 2012, is Walla Walla, which is a Native American term meaning “Many Waters.” It is also the home of Many Wineries, 140 and growing. One of the photos is of my wife “Pamela Darling” and me sipping a fabulous Cabernet Sauvignon in our teeny tiny back yard along Garrison Creek. The other is a night out of dancing in one or Walla Walla’s many downtown tasting rooms that feature live music on weekends.

Pam actually works occasionally as a tasting room associate at Zerba Cellars, just over the state line in Oregon. We also own a very small interest in another much larger Oregon winery, Willamette Valley Vineyards. We are “Industry,” as they say here, which means all of the other wineries give us a 25% or 30% discount when we buy their wines. I absolutely LOVE retirement life!”