An adapted version of “The Town Crier” sent by Jeanne Harman on
August 28, 2017.

Thank everyone so much for the updates regarding our graduates who have been in harm’s way with Hurricane Harvey.

I overlooked one important graduate who lives in San Antonio- David Walsworth.  Dave reports:  San Antonio “dodged” the proverbial bullet. We only had 2 inches of rain at our house. Windy conditions but not strong enough to do any damage at our place, and no loss of power. 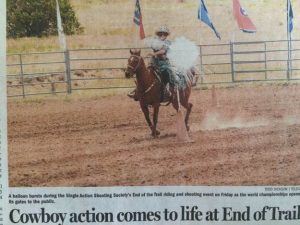 Susan (Harkness) Hill:
“I finally made the front page of our local (tiny) newspaper. The Single Action Shooting Society held their annual world championship in June, and Ralph and I hosted the mounted shooting portion of it. We are having so much fun with this sport, it is keeping us young(er). Also, I have started wearing a helmet since I have fallen off so many times. Since I started wearing it, I have not fallen. Yay! In addition to wearing old west costumes, the ladies can wear skirts (which I have on) and other period dress which is always fun.” 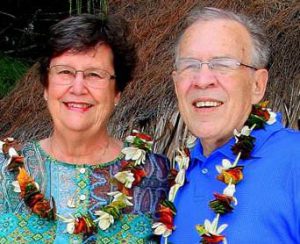 Janene (Loftis) Jett: My husband, Ernest Jett, and I celebrated our 50th anniversary in March. We took a Wind Star Cruise through French Polynesia and renewed our vows on a motu near Tahiti. It was a beautiful, beautiful place and we’d love to go again someday. This is a picture of us at the vow renewals. 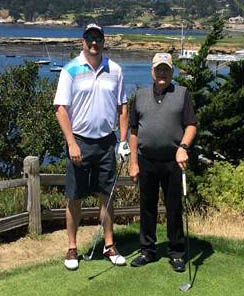 Robert “Little Red” Wilson and his son at Pebble Beach:
“My family sent my son Rob and me to Pebble Beach for my 75th birthday. They are so sweet. We had a great time. We played Pebble Beach and Spyglass and then we went to Anaheim and played Anaheim Hills. This was a tournament with Rob’s work in which we won. Great trip, great time with my son. Yes, he is my son at 6’3″. Knew you were wondering.😇” 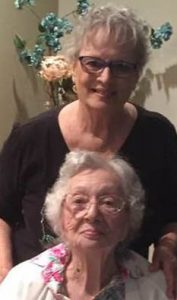 Cynthia (Kirkland) Mazza and her mother:
Cynthia’s mother was born on August 3, 1915 and turned 102 years old this year.  How very lucky are both these girls to have one another for so long!  We need to find out Mrs. Kirkland’s secret to a long life!  Congratulations! 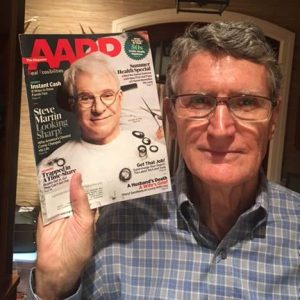 Jack Martin: DO YOU SEE A RESEMBLENCE? I don’t know how many of you are aware that our very own Jack Martin is a first cousin to Steve Martin, “the Wild and Crazy Guy”. Jack’s father and Steve’s father were brothers. A friend of Jack’s recently took this photo and I got Jack’s permission to share it with you. I wish Jack could pull some ‘clout’ and have Steve come to one of our reunions! Wouldn’t that be Wild and Crazy? 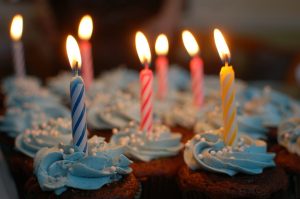 Pat Payne
“We are soggy & wet here in Naples but all is fine. Tropical Storm Emily was a surprise and dropped 6 inches on us which is on top of 22 inches in June/July. So the water table is high. This is the tropics so we have to be on our toes during the summer.”

Jack Martin
Jack Martin has moved from San Antonio to Waco. Whew!…That long-distance dating between the two cities seemed to get longer each year…. or was it the fact that we got older? At any rate, we were both blessed that during the past 4 years we were accident-free between the two cities. Anyone who does any traveling along I-35 knows the stress level of the journey.

Angie (Plemons) Lehman
Angie recently had open heart surgery on August 16th with three new stents. Angie had gone to the doctor because her leg was swelling (a sign that we all should watch out for). That doctor sent her to a cardiologist who did a cath and determined she had a lot of blockage; therefore, the open heart surgery. I have been informed that Angie is doing okay in spite of being in pain. If visits are made, please keep them short as Angie tires quickly.

Feedback From Our Graduates

“My goodness! Our class really is a “class act” with such compassion and support shown for all members through individual communications and the newsletter. Once again thank you so much Jeanne for your great effort all year long.  It lifts my heart, especially, to read how classmates are making good recoveries from varied medical procedures and changes in health. I was so glad to hear the good news about Randy Turner, Terrell Reagan, Bonnie, and Karon’s son that they are really getting back on their feet, that Allan Myers is home and doing well in recovery from a second back surgery, and I’m very grateful for the sacrifice of the pig to help restore Dick Tooker to health and for Jim Maxwell’s successful surgery and return home. I wish you all solid, continued, and speedy recoveries. My prayers continue for Mickey Lade Perkins and a continued good outcome from Watchman implant procedure.

Congratulations to John Anderson for the successful Sharkfest Swim. That is really awesome!

On a bit of a sadder note, I’m sorry that Carlton has passed. I was in several Latin classes with he and Jan. They were both so smart and such thoughtful people.

I want to thank those classmates who sent e mails, cards, and notes of sympathy on my husband’s passing. The family has had yet another sorrow today. My beloved stepson Timothy Allen Hofer passed away after an intense battle with cancer. I hope that all of you guys in our class are getting a PSA test every year! Caught early, the outcomes of treatment are usually successful. Caught at stage 4, there is so little that can be done. For those of you who were fighter pilots in the class, you can appreciate that Tim was in charge of Naval Weapons Testing for our country and developed a number of the smart weapons like the ones that go down elevator shafts, the ones that took out Osama Bin Laden, and he was in charge of the development of the helmet controlled fighter jet weapons.

Jeanne I loved the inclusion of the “Timeless Secrets of Happy People”. Such upbeat things to think about!

And a great big thanks to Elizabeth Bentley for taking over the WHS website and Pat Payne for funding it. That site contains so many reminders of great times we have had at reunions and of our senior year.”

Blessings to all of you,

“I agree with Dick Tooker.  I have two artificial knees and acrylic lenses in both eyes, and while I am not in John Anderson’s league, I can do pretty much anything I want.  I drive without glasses, do a weekly aerobics class, take moderately long walks, and last April did a 23-mile charity bike ride.  As Dick says, ain’t technology wonderful !”
Bill Alexander

Regarding our Website:
“Jeanne, thanks so much for sharing the news about everyone.  A big thank you to Elizabeth and Pat also. I love hearing about our classmates. We are an outstanding class who are bound closely to each other. I don’t know of another class like ours. We are truly special!”
Blessings,
Carolyn (Wolf L)loyd

“Elizabeth Bentley, I’m so happy you have taken over the WHS ‘60 website.  And thanks to Pat Payne for funding it.”     Tommye Ruth (Blair) Toler

“Elizabeth is the one I was hoping would do the job. I think she will do a great job.”
Larry Thomas

“Hats off and kudos to Elizabeth Bentley for all her dedication and hard work. I enjoy keeping up with the news on the WHS class of ’60 website and I’m sure everyone is just as appreciative of her as I.”
Judy Biles

Regarding Jane Fortner: ( long-time friend and companion of Charlie Sligh)

“Thank you so much for sending this information out to our Waco High School Class of 1960 Graduates.

“Eve and I met Jane at our church, Austin Avenue United Methodist.  It was abundantly clear that Jane was support for Charlie, as he was support for her.  Their devotion to our church and to each other has been inspiring.   From our observations, no truer words could be said than has been said in Jane’s obituary, “Jane Pridgeon Fortner’s lasting legacy is her selflessness and undying faith in God.

“We will miss her, as I am sure will everyone who came to know her, be it from years ago or of late.”
Sincerely,
Joe and Eve Riley

Several people sent comments regarding the video.  These have been posted to the website http://whs60.org/wp/2017/08/11/remembering-our-war/#comments.

One of the interactive features of the new website is the ability to comment on the blog posts.  You’ll note that each post  has a little “quote bubble” on the upper right side.  When you click on that, you can add a comment and/or read comments that other people have left.

The interactive feature also works on the photos in the Reunions section of the website.  When  you click on a thumbnail picture, a larger version opens up.  There is an area under the photo to add comments.