I just received this report from Joe Riley regarding Charlie Sligh. So glad for dodged bullets and our heart doctors here in Waco. I will let you know whenever I find out where Charlie will be for rehab. Charlie does not have a cell phone or computer. 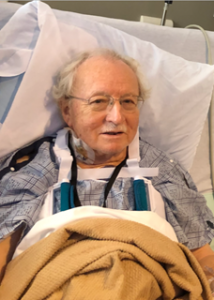 Charlie Sligh had triple bypass surgery this past Thursday, October 31st Halloween of all days.

He’s fine, doing quite well, in fact. As of now, he’s in room 385 at Ascension Providence Hospital, Waco. He may be moved to St. Catherine’s or some other rehab facility in Waco as early as this afternoon or tomorrow.

I found out about his situation this past Friday, but waited to let you know until I visited with him this morning and got his permission to let you and “you all” know.

He hadn’t shown any of the classic symptoms of heart problems, but had a persistent pain in his stomach area that was causing concern. After several exams failed to produce a diagnosis, he was referred to cardiac physicians who scheduled him for a cardiac catheterization. That’s what revealed the significant blockages, leading to next day surgery.

As they say, Charlie “dodged the bullet.”