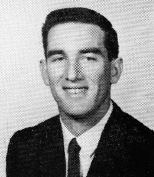 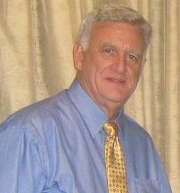 I am sorry to report that Scott Horne passed away this morning.

I received an email from his wife bearing the news. Paula said Scott did not want a funeral but instead, there will be a small gathering in Waco sometime the end of the month or the first of next month. She will be back in touch with me regarding the particulars. Paula said that Scott’s body would be at Waco Memorial in the mausoleum. I will inform you as soon as I become aware of all the plans.

Please remember this family with your thoughts and prayers during this difficult time for them. As you are aware, Scott had been ill for quite some time but it is never easy for the final good-bye. 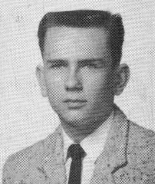 I am sorry to report that Roy Don Phillips has passed away in Kerrville, Tx.

Roy Don had been living in a nursing home in Kerrville following several strokes. He had his final and fatal stroke on Sunday, January 6, 2019.

There will not be a service and no obit is going to be published in the Waco paper. His body is being cremated.

An adapted version of “The Town Crier” sent by Jeanne Harman on January 2, 2019. 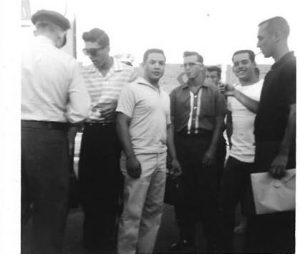 June 20, 1960 – On their first day as Marines, these boys were getting ready to board a bus to the Marine Corp recruiting office in Dallas, Texas.

Pictured are: (l-r) probably the bus driver, Rodney Cross, Edward Hernandez, Gene Carson, Vince Tusa, and Jack Miles.(Gene said Edward Hernandez was a year younger than the rest of them) Gene got out of the Marines four years later on June 19, 1964.

(Below)Some pictures of Gene through the years enjoying time with our graduates. Gene was always there, whenever possible.

Please remember the following graduates who are facing health issues. Forgive me if I have overlooked you so please let me know if you need to be included in the list. Scott Horne, David Peeples, Linda Shelby Lyons, Bob Easter, Betty Vaughan Willis 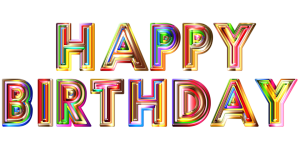 This month features David Dibb, who says he enjoys writing. For the past 5 years David has written a monthly column for a local Seniors’ newspaper, Golden Life, in Florence, SC. The first 3 years the columns were of a Biblical perspective on seasonal themes or events of current interest. David said after saying all he could think of after four December columns, the columns are now often about what strikes his fancy or in his reading. His column is still called “In Due Season”. (see Proverbs 15:23) For the last 3 years, David has also been writing a front-page article which highlights a local senior in his area.

After our recent WHS reunion in October, David decided to share a bit of Waco’s history with his readers. He sent me a copy of the newspaper with the article. I thought all of you might also be interested in reading about Waco’s past, and I asked David if I could feature him for our SHOW and TELL this month. David was gracious enough to agree and also agreed to share a little of his bio with us. David and his wife, Anita, like to travel and have been doing so for quite some time. At the end of his article, I have included a few of the photos of them on some of their trips. Thanks for sharing with us, David. I guess you can fill in for me when I need help.

Brief Bio on David
After graduating from WHS in 1960, David attended Texas Tech where he earned a B.S. in Textile Technology. While working on that degree, he had a summer job in Pensacola, FL at a Monsanto nylon plant. While living in Pensacola, he attended a small Baptist church where he discovered his need for a Savior ….and also “discovered” Anita. They were married in that very church in 1966 and then both of them returned to Lubbock where he obtained his M.B.A. from Tech. Upon completion of his Masters, David said he then got a “real” job with Monsanto back in Pensacola and for the next 35 years (except for a 4 year stint in the USAF), worked as a process engineer in nylon and polyester fiber manufacturing. He never left Monsanto to work for another company; however, because the textile business underwent a lot of mergers and changes in ownership as it struggled against the economics of overseas competition, he worked for Monsanto, Celanese, Hoechst, and Fiber Industries, in Florida and North Carolina, and finally, Wellman, Inc. in Florence, SC. David retired in 2002.

David and Anita have 3 children. Their daughter, Whitney, is a free-lance management trainer in Germany; their oldest son, Kevin, is an IT specialist with home office in Fayetteville; and their youngest son Brian, after 12 years in the USMC, now works as a project engineer on oil platforms in the Gulf of Mexico but calls home to Shenandoah, VA. David and Anita are blessed with 8 grandchildren.

David and Anita have always liked to travel. They have spent time in Germany, Belgium, Amsterdam with their daughter. They have been on mission trips to Costa Rica and Mexico. They have time-shared in England and Scotland. Recently, David was brave enough to drive a right-hand Fiat around Ireland after a bus tour of the Scottish Highlands. They have driven up the West Coast of the USA, through New England to Prince Edward Island and Halifax, Nova Scotia. This year they joined some friends for a tour of China, where they climbed the Great Wall, entered the tomb of the Terra-Cotta soldiers, visited the Panda breeding center, and cruised the Yangtze River. They often visit the Smoky Mountains National Park (especially in the fall) since it is so near their home in Florence, SC.

For about 35 years, David has been a Bible teacher. Both he and Anita work in several areas of their church but David said that teaching and ministering to a class of about 20 couples is a rewarding use of his time that is provided by retirement.

This is the article that David Dibbs wrote about Waco.
What do outsiders know about your hometown? Around here, Blenheim is known for its ginger ale, and Florence was known for its railroad history and dental services. A few weeks back, I returned to Waco, Texas, for my 58th high school reunion. Having lived at least 1000 miles from Waco for the last 58 years, this was only my second reunion. The dramatic changes in the city since my last visit (our 50th, just 8 years ago) caused me to reflect on what gives a city its personality and reputation.
Waco’s early history is rich with Texas Longhorn cattle drives, Texas Ranger law enforcement, and Indian lore. On an 1850’s map of Mexico to Kansas, the state of Texas is covered with cattle trails that converge on Texas’ northern border at the Chisholm Trail, just below Indian Territory (sometimes called Oklahoma). The objective of the cattle drive was to get the cattle from Texas (or even Mexico), where they were worth about $4 a head, to Kansas, then by rail, back East, where they were worth about $40 a head.
Waco was established in 1849 near a Texas Ranger fort, shortly after the Republic of Texas became our 28th state. It was named for the Hueco Indians, who had a nearby village. One of the main trails on the Chisholm route paralleled the Brazos River until it reached a spot at Waco where the river was shallow enough to drive cattle across. In 1870, a suspension bridge was built across the Brazos, channeling even more traffic, business, and cattle through Waco. Designed by Thomas Griffith, who had completed the first bridge across the Mississippi, and built with materials from the same company that helped construct the Brooklyn Bridge, the Waco Suspension Bridge was so successful that the tolls (5 cents per head of cattle, plus tolls on other traffic) quickly paid off the $141,000 construction cost.
In the 1880’s, Baylor University moved to Waco, and a local pharmacist developed the formulation for Dr. Pepper, capitalizing on the artesian water recently discovered under the city. The next time Waco made national news was May 1953, when one of the deadliest tornadoes in US history hit the area. Cutting a path 1/3 of a mile wide, and with winds of 260mph, the tornado that struck Waco killed 114 people and demolished 1600 homes and other structures.
But in 1993, there was a surreal event that re-defined Waco to many Americans. A religious cult calling themselves the “Branch Davidians” who had been living in a compound outside Waco since 1962, came under FBI scrutiny due to their reported weapons collection and the number of women and children possibly held against their will. Their leader, David Koresh, who claimed to be a Messianic prophet, refused to allow the FBI to enter the compound, and several weeks of “negotiation” ensued. Then the well-armed ATF Hostage Rescue Team got involved, and on April 19, impatient and embarrassed by the drawn-out lack of results, they attacked the compound with tanks and tear gas. Fires and gunshots broke out inside the compound, all captured on national TV, and in the end at least 80 died, including 25 children and 4 ATF agents. From that moment, many Americans pronounced Waco, “Wack-o”.
Then in 2013, the national TV exposure that had helped bring Waco’s image down became instrumental in building it back up. Chip and Joanna Gaines launched their Fixer-Upper series on HGTV in May 2013, and America (and the world) fell in love with this quirky, talented, loving, and driven couple. Over 5 years, their 79 episodes have not only changed solid old houses into beautiful new homes, it has shown off the down-to-earth honesty, unselfish family values, and productive work ethic that I know to be typical in Texas. Their retail complex in the Waco historical district, near the old suspension bridge and the Dr. Pepper Museum, includes The Silos, which sells clothing and Joanna-style home décor, a restaurant, and a bakery. And like the bridge 145 years ago, it’s bringing more commerce and travelers to this popular crossroads on the Brazos River.
In her book, The Magnolia Story, Joanna says she has listened to God’s guidance for many of her life-changing and business-changing decisions. Their “all in” approach to any project reminds me of this Biblical admonition: “And whatsoever ye do, do it heartily, as to the Lord, and not unto men” Col 3:23